James Hussey, CEOImmunotherapy has long been used to effectively treat various types of cancers by unleashing the power of the body's immune system to recognize and destroy cancer cells. However, in most cases, the effectiveness of the process is limited to hot tumors, and instances are aplenty where cold tumors go undetected. The immune system cannot rightly spot them owing to the camouflaging nature of the tumor. That's why tumor-infiltrating lymphocytes fail to penetrate, and checkpoint inhibitors remain ineffective. It raises the urgent need for innovative methods to activate the immune system, enhance T cells, mitigate immunosuppression for treating cold tumors.

Seneca Therapeutics is all set to move the needle in the cancer treatment space with its revolutionary cancer therapy. It is developing a pipeline of novel cancer agents utilizing Seneca Valley Virus-001 (SVV-001)—an oncolytic virus—that binds to the TEM8 (a single-pass cell surface protein predominantly expressed in tumor endothelium) receptor in solid tumors such as neuroendocrine tumors, breast cancer, and lung cancer. "It is not a human virus and no pre-treatment neutralizing antibody has been detected in humans. Historically, tumors that express TEM8 lead to a significant reduction in patients' lifespan. By targeting these specific tumors, SVV-001 can revolutionize cancer treatment," says James Hussey, CEO at Seneca Therapeutics. More importantly, SVV-001 converts cold tumors into hot tumors that enables T cells to recognize the tumor cells and destroy them.

SVV-001 was discovered by a passionate scientist and the founder of Seneca Therapeutics, Dr. Paul Hallenbeck back in the late 1990s. During development, he tested the virus intravenously on different patient populations but outcomes were not consistent.

Seneca Therapeutics: Leading the Anti-Cancer Crusade from the Front

"We did not understand that SVV-001 needed to bind to TEM 8 and that down regulation of interferon was needed for replication," Hussey adds. For example, patients with neuroendocrine tumors had excellent responses because both TEM 8 expression and interferon down regulations were present.

When a scientist at Memorial Sloan Kettering discovered how SVV worked in 2017, Dr. Hallenbeck bought back all the rights of the drug again and reactivated it under Seneca Therapeutics. Reviewing the cases of all the patients treated during the 2005 and 2010 clinical trials, he observed that patients with TEM8 on tumors lived longer than others. This made them realize that SVV-001 needs to bind to TEM8 to effectively drive cancer treatment. "It uses body's own immune system to kill tumors and subsequently, patients' life expectancy significantly increases," Hussey adds.

More importantly, from the safety perspective, there are hardly any side effects of SVV-001 on patients. SVV has been delivered via a single systemic intravenous dose in 76 patients in three trials—Phase I/II in NET Patients, Phase I/II in Pediatric Patients, and Phase II in ES SCLC Patients. During the Phase I/II trials, only a few patients reported pain as their tumors grew from cold to hot. Mild symptoms or fever were observed in most people, unlike traditional chemotherapy, which is harsh on patients.

Such success in the trial phase has instigated Seneca Therapeutics to use multiple doses in the future rather than a single injection. "Our initial study in neuroendocrine tumors will be intratumoral and we will give six or eight injections of SVV-001 in combination with Opdivo and Yervoy," says Hussey. Moving ahead, the company will work on both intratumoral and intravenous approaches, focusing on neuroendocrine tumors for the initial clinical trials. Combining the ability of SVV-001 with common checkpoint inhibitors, Seneca Therapeutics is working passionately to launch the drug as soon as possible. "We are expecting to hit the market by 2024 and change the dynamics of the cancer treatment for TEM 8 positive patients," says Hussey. The company has also partnered with various regional cancer centers to intratumorally initiate clinical trial phase II/III. Seneca Therapeutics will then start a more extensive IV program for neuroendocrine tumors and eventually move to develop gene therapy products. 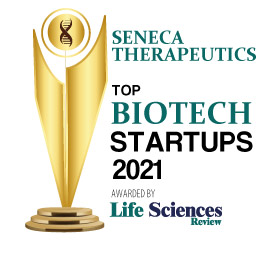 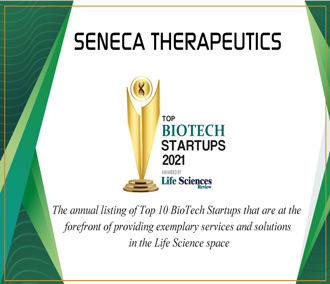