Dr. Jin-San Yoo, Founder and CEOIt was 2001, a time when most life science companies specializing in oncology majorly focused on small molecule-based drugs designed to pass through cell membranes to reach intracellular targets. But the simplicity of small molecule drugs also started creating a roadblock. These drugs were essentially “one-trick ponies,” which means that they can do only one thing, so they kept doing it regardless of the physiological state of the patient, because they were not equipped to receive feedback from the body frequently causing more harm than benefit. At the time, antibody based medicine was still in its nascent stage. Unlike small molecule drugs, antibody-based drugs had the potential to facilitate more precise targeting of cells.

There were many visionaries who sought to bring antibody-based medicine to the fore in the oncology space. One of them was Dr. Jin-San Yoo a researcher whose passion for antibody-drug research began when he was working at the Department of Cell Biology and Molecular Biology, Scripps Research Institute, San Diego, CA. His research path led him through several renowned organizations, including LG Life Sciences and the Korea Research Institute of Bioscience and Biotechnology (KRIBB).

Finally, in 2008, Dr. Yoo consolidated his research under his own startup company, PharmAbcine, by enrolling in Novartis’ 2008 GATE program to garner the global pharma giant’s backing. PharmAbcine secured the first place and procured the partnership it needed to jump start its business.

Over the next few years, PharmAbcine’s impact in the antibody-based oncology space enabled it to get funding and backing from some of the greatest players in the industry, including the world’s largest healthcare-dedicated investment firm, OrbiMed. The company continued its meteoric rise, and finally, in 2018, went public on KOSDAQ, the Korean equivalent of NASDAQ in the U.S.

Today, PharmAbcine is positioned at the helm of the oncology space as an innovative biotech company delivering therapeutic antibodies to patients with unmet needs. Since the last decade, the company has acquired extensive expertise through research collaboration and clinical studies alongside its partners (including pharma companies such as Sanofi, MSD, and Roche). Moreover, the company’s research and development workforce has grown to over 50 personnel, more than half of whom hold a master’s degree or higher in life science and adjacent fields. “What further complements our people and research skills is our unique antibody library called HuPhage, consisting of over 10 billion antibodies. The antibody library provides the diversity of antibody candidates for target antigens, ensuring the highest success rates of developing therapeutic antibodies for various indications,” adds Dr. Yoo.

Taking Oncology Therapeutics to the Next Level

Interestingly, today, Pharma organizations from all over the world have already begun placing their bets on combination therapies using PharmAbcine’s drug candidates to achieve successful outcomes for cancer treatment.

“For instance, our primary pipeline drug candidates Olinvacimab, PMC 403, and PMC 402 are exhibiting excellent results when used in combination with the existing anti-PD-1 drug, even demonstrating significantly improved anti-tumor effects in clinical and preclinical settings,” says Dr. Yoo. PharmAbcine’s lead offering, Olinvacinab, when combined with MSD’s humanized antibody, pembrolizumab (Keytruda), can significantly enhance outcomes for patients suffering from metastatic triple-negative breast cancer (mTNBC). In fact, during the phase 1b combo trial, the combination showed a 50 percent overall response rate (ORR) and 67 percent disease control rate (DCR) a stark contrast from the nine percent response rate shown by Keytruda on its own. What’s more? Olinvacimab shows only mild in grade one or two adverse conditions like reversible capillary hemangioma around neck and chest, whereas its competitor drugs are known to cause more severe, grade three to four adverse effects like hypertension, GI perforation, hemorrhage, or proteinuria. This excellent safety profile is what gives Olinvacimab a competitive edge in the industry.

Alongside, the drug candidate PMC 403 is also proving quite exceptional in the preclinical studies for ophthalmological diseases like age-related macular degeneration (AMD), diabetic retinopathy (DR), and diabetic macular edema (DME). Unlike the existing drugs that target vascular endothelial growth factor (VEGF), PharmAbcine’s PMC-403 drug candidate activates the TIE-2 cell surface receptors, thus promoting vessel stabilization and facilitating highly effective treatment. As a result, PMC-403 could be used for patients who show low response to the conventional drugs in the market. In fact, PMC-403 has delivered better optic nerve response rates than Eylea (one of the best-selling eye drugs) in the animal model studies, which signifies a higher potential in recovering impaired vision. Dr. Yoo adds, “PMC-403 can also be used for the treatment of many vessel related diseases, partially including some kidney conditions, acute respiratory distress syndrome from COVID-19 infection, sepsis, and Alzheimer’s.”

Equally impressive is PMC-309, the company’s novel immuno-oncology drug candidate that targets the V-domain Immunoglobulin Suppressor of T cell Activation (VISTA). Thanks to the low response rates of the existing drugs, this drug with its unique mode of action has wide applications as it can be used in both mono and combo therapies to treat cancer patients.

Owing to such an impressive portfolio of drug candidates, PharmAbcine is carving an irreplaceable niche in the oncology treatment space. Having received a clearance to push the mTNBC combo trial to phase 2 from the Human Research Ethics Committees (HREC), the company will focus on first patient recruitment and generating encouraging clinical data in the larger population setting. PharmAbcine has also signed a Material Cooperative Research and Development Agreement (MCRADA) with the U.S. National Institutes of Health (NIH) to evaluate potential therapeutic effects of PMC 403 in Systemic Capillary Leak Syndrome (SCLS)/Clarkson Disease, a fatal orphan disease, for which, NIH has just begun in-vivo studies. In the meantime, the company will also advance its early-stage candidates, including PMC-122, a bispecific immuno-oncology antibody targeting T cell and tumor cell interaction, and PMC-005BL, an antibody that can be developed for cell therapies (CAR-T/CAR-NK). The future, hence, seems rather bright for PharmAbcine! 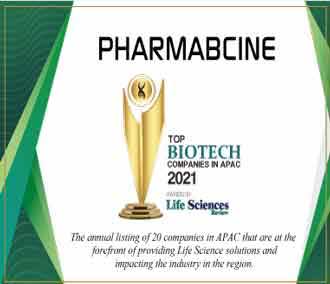